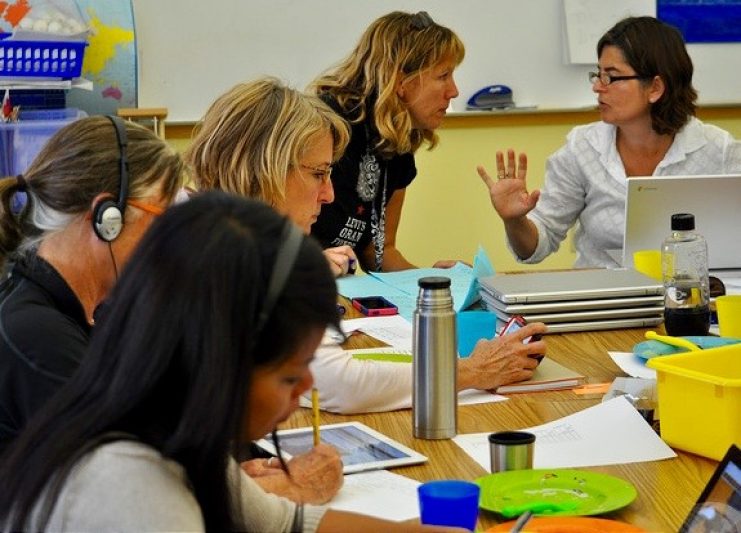 At Lead by Learning, we believe inquiry is an equity strategy that helps educators understand student assets and build supportive awareness of our implicit biases.

This value comes to life in our work with teachers. Nessa Mahmoudi is a second grade dual-immersion teacher at Melrose Leadership Academy in Oakland Unified and is a teacher leader at her site.

Through her Lead by Learning inquiry she works to critically examine the varied assumptions we make about teaching and learning, including her assumptions about her English Language Learners and her teaching practice.

One thing Nessa has learned about her assumptions is that they often oversimplify an inherently complex situation. When she began working at Melrose Leadership Academy, she had very little experience with two-way immersion programs, and sought to define it for herself. In her preliminary research she came across two common assumptions about the two-way Spanish immersion classroom:

As the school year began, Nessa studied her students’ language through inquiry and began to question these assumptions about two-way immersion.

Classifying students into English and Spanish speakers was much more complicated than it at first seemed. While about half of her students spoke English at home, they often spoke varying dialects of English, including African American Vernacular and Chicano English. Of the Spanish speakers in her class, she came to learn that their families spoke a variety of dialects as well, with students from Spain, Mexico, Cuba, and Puerto Rico. Then there were students like Juan who identified as a speaker of Spanglish at home. Akili’s father spoke to him exclusively in Swahili and Soraya’s first language was Arabic. She found that the assumed language dichotomy was in fact a plethora of nuanced language usage.

Pairing students for oral language practice was not as simple as her guidebook seemed to infer either. Due to the diversity of language experiences in the class, many students were not able to take on the “expert” role in either English or Spanish, but were really learners in both languages. Nessa began to voice some challenging questions as she met with her colleagues during collaborative inquiry:

Do all students inherently have an opportunity to be language experts in my classroom? How could I develop meta-linguistic awareness in all my students about the various funds of knowledge they were bringing to their Academic English and Academic Spanish learning?

By the end of her inquiry, Nessa had come to a new set of realizations:

Nessa’s learning illustrates the power of collaborative inquiry in supporting equitable teaching and learning for all students. Read Nessa’s story in her own words.

This article was written in October 2017, Mills Teacher Scholars changed their name to Lead by Learning in the fall of 2020.

As I got to know the diverse group of families and students in my classroom, I soon realized that my simplified definition of two-way immersion did not represent the true linguistic complexity of my classroom.