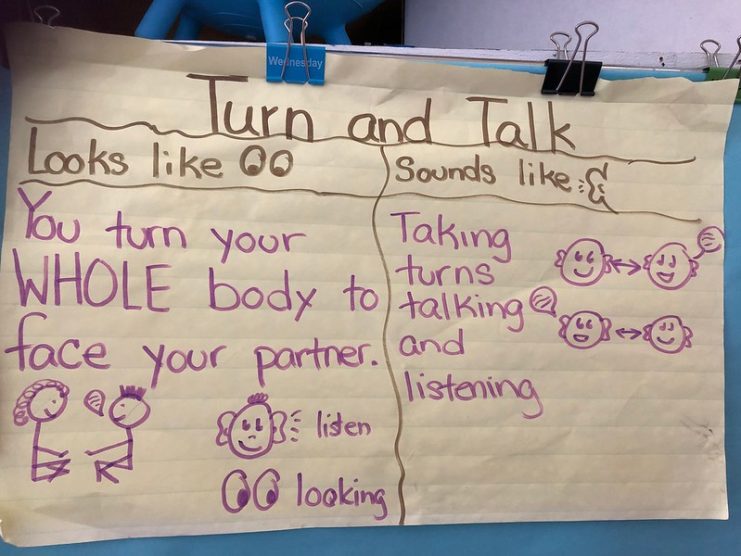 Turn-and-Talks in Kindergarten Are Anything But Easy

Teacher:   Tell your neighbor which one you like best, frogs or turtles.

Student A: Umm, because Princess Tianna kissed a frog.

Part of our daily English Language Development in my Kindergarten classroom is a strategy called “Turn-and-Talk” (TnT), during which students have conversations in pairs based on a prompt. At the beginning of the year, my third year of inquiry work with Mills Teacher Scholars, I heard a lot of conversations like the one above. I felt inspired to study how to help my students develop better conversation skills. I wanted them to be able to stay on topic and to be able to focus on another’s ideas as well as expressing their own. I hoped that developing this skill would start them on a journey of listening to and caring about someone else while developing a joyful, connected classroom culture.

I predicted that after a couple of months’ practice, my off-topic speakers and what I call “silent witnesses” would be able to engage in simple, one-exchange conversations. Instead, I found that their TnT conversations were still all over the place and still seemed self-centered. In true inquiry fashion, I reflected on this outcome with my peers at our next meeting. My coworkers suggested that I more clearly discuss, model, and have students practice my expectations. They also suggested that I put some students into triads and switch students’ groupings more often, so that students with stronger discussion skills would have more frequent opportunities to model for their peers.

These changes did produce modest improvements, but half the class was either still not talking, or only concerned with getting their ideas voiced without hearing their partner’s. One little boy, Pao, consistently spent almost every TnT turning the conversation to Minecraft video games, even when talking with me! I was considering changing my inquiry question. However, as I listened to other teachers share about their inquiries, I felt encouraged to keep at it. I wasn’t the only one struggling or revamping my approach multiple times. With my colleagues’ help I clarified my learning objective. I wanted my students by the end of the year to listen to each other well enough to be able to ask one follow-up question during a TnT conversation.

Armed with more strategy tweaks and a renewed sense of determination, I was ready to persevere. At our next TnT, I pulled out two puppets and gave them the prompt. Instant attention, giggles and engagement!  My puppets modeled a TnT conversation, then walked around with me and coached students in their conversations. Next, I brought students up to the front to demonstrate for the class. I asked students to go around and coach each other during another session. Finally, I was able to find videos of students performing a TnT.  More students were catching on, but I still felt I wasn’t reaching my goal.

That’s when Pao, the Minecraft enthusiast, gave me renewed hope and energy.  As I was video recording my focal students’ conversation to share at the next inquiry meeting, I overheard him complete not one, but two follow-up questions with his partner. What was even more exciting was that he was on topic. Not one reference to Minecraft! He had adapted the script I was teaching with a simple “why?” and “how do you know?” He was doing it: he was on topic and focused on someone else, showing that he cared about what they thought. Wow!

Pao inspired, rejuvenated, and redirected me. Rethinking, observing what worked and what didn’t, and having my thinking stretched by my colleagues had made a difference. If Pao could turn this big corner, I must have been doing something right. When I reflected on what was happening rather than not happening, I could see growth and improvement. Some students were still not where I wanted them to be, but many students were now, like Pao, showing interest in hearing another person’s views. That was what really mattered to me. 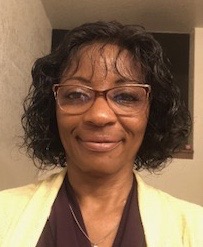 A Miss Honey wannabe (from the movie Matilda) Tonie Mitchell is a 16 year educator currently in her 5th year of teaching Kindergarten with the San Lorenzo School District. Tonie gets a kick out of the way people react when she tells them she teaches Kindergarten because it is fun! When not in her classroom, hunting for books in her local library, searching kinder blogs, or reading kinder research materials, she enjoys spending time with her family, cooking, reading just for the fun of it, walking her dog Grace, and spending time perusing Pinterest.

With my colleagues’ help I clarified my learning objective. I wanted my students by the end of the year to listen to each other well enough to be able to ask one follow-up question during a Turn-and-Talk conversation.